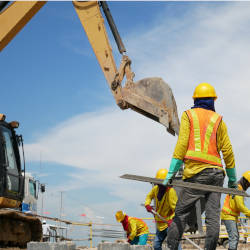 A serious brain injury can have a long-term and often life-changing effect. Brain Injury Group works with a number of specialist personal injury solicitors across the UK to help those affected by a brain injury to get the support and compensation they deserve to help them to move forward.

In this case study, we look at how Barcan+Kirby’s specialist personal injury solicitors helped a man (whose name has been changed to protect his identity) to rebuild his life after suffering a traumatic brain injury at work.

Our client, Kieran, who was in his 50s, was working on a building site when a co-worker lost control of a piece of heavy equipment he was operating and it struck him on the head. As a result, Kieran fell back onto the concrete floor and was knocked unconscious.

A claim was made against three Defendants who blamed each other but also blamed Kieran who they alleged had control over the co-worker.

As a result of being struck on the head, Kieran suffered life-changing injuries, including a depressed skull fracture and severe traumatic brain injury. He was placed in an induced coma in hospital and required surgery. He also developed epilepsy which was successfully controlled by medication.

Due to the brain injury, Kieran had problems with his hearing, balance, vision and memory. He had cognitive impairment and some changes to his personality. He also suffered from facial muscle weakness. There was a dispute as to whether Kieran had the capacity to manage his financial affairs and the extent of his cognitive impairment but a financial Deputy was appointed to protect him. There was also a dispute in relation to whether, and if so to what extent, Kieran’s life expectancy had been impacted by his injuries.

Kieran’s injuries were so severe and permanent that they prevented him from returning to his job, and from being able to work in any similar role.

Our specialist head and brain injury solicitors were able to negotiate a settlement of £1.6 million compensation for his injuries and financial losses. The compensation awarded included: his past and future lost earnings; care provided by his family; equipment to assist in minimising the effects of his injury; the future need for a financial Deputy; and a case Manager and support worker to assist Kieran to go safely about his personal life.

Although compensation cannot undo a brain injury and the devastating impact it has, it can provide the opportunity to help the individual to start to rebuild and reshape their life so that they can move forward. Compensation can also sometimes provide an element of closure after such an unexpected and life-changing event.

This article was produced by Myfanwy Buckeridge of Barcan+Kirby

Myfanwy is a Senior Associate in Barcan+Kirby’s personal injury team. She has over 31 years’ experience representing clients and specialises in serious injury claims including head and brain injuries. Myfanwy strives to establish early access to rehabilitation and care packages for her clients.

She is also recognised in Chambers and Partners UK 2022 for her advice on significant cases arising from accidents at work, which often encompass brain injuries.

How Brain Injury Group can help

If you have been injured in an accident at work, and would like to speak to a specialist brain injury lawyer for a free, no obligation chat, contact us via email (enquiries@braininjurygroup.co.uk), telephone (0800 612 9660 or 0330 311 2541) or talk to us via live chat.

Compensation after a brain injury at work – Kieran’s story

A serious brain injury can have a long-term and often life-changing effect. Brain Injury Group works with a number of specialist personal injury solicitors across the UK to help those affected by a brain injury…
Read More

We were instructed to act on behalf of child F, through his carers and Special Guardians. Child F had sustained a severe traumatic brain injury as a result of non-accidental injuries caused by his natural…
Read More

Brain Injury Group @braininjurygrp
21 hours ago
We're taking a short break from webinars due to staff leave, but you can still access the on demand recordings of previous webinars - visit our website https://t.co/lZLA6WW4wU

Brain Injury Group @braininjurygrp
4 days ago
The Court of Protection is a specialist Court which protects and supports vulnerable people who are unable to make decisions for themselves about their finances, property and personal welfare due to lack of mental capacity. Find out how we can help. https://t.co/uUcTshGeXl
View on Twitter
0
2

Brain Injury Group @braininjurygrp
6 days ago
Great night with @PAGExpert at the AvMA dinner in Bristol, thank you! https://t.co/qYdTy5Nv0e
View on Twitter
1
5

Brain Injury Group @braininjurygrp
6 days ago
We’re in Bristol today as guests of @PAGExpert for the AvMA 40th anniversary charity dinner hosted by @StJohnsChambers . Hoping to see lots of our member firms this evening - do pop over and say hello! Thanks for the invite @SilvaGeoff! https://t.co/PD1IEVNuCo
View on Twitter
3
10

Brain Injury Group @braininjurygrp
7 days ago
We're taking a short break from webinars due to staff leave, but you can still access the on demand recordings of previous webinars - visit our website https://t.co/lZLA6WW4wU

Brain Injury Group @braininjurygrp
1 week ago
The BIG Brain Injury Services Directory has the answers for people affected by brain injury, providing a comprehensive A-Z listing of services and support for people with a brain injury, their families, and people who work with them.
https://t.co/CEUgOanlZp
View on Twitter
1
2