The family of a 60-year-old woman, who was struck by a car in February 2011, have spoken of their struggle to deal with the effects that a brain trauma has had on her.

The woman, who was working as a lollipop lady at the time of the accident, was positioned ready to allow a pedestrian pushing a pram to cross the road, when a 69-year-old driver collided with her.

She was taken to hospital suffering from serious head injuries, and swelling of the brain left her confused. One of her daughters reports that upon arrival at the hospital to see her mother, having just been told about the incident, she found her “talking gibberish”. Furthermore, she states that her mother did not recognise her family members.

When she began to recover from the initial accident she was transferred to a unit in Newcastle specialising in brain injuries, where she remained for eleven months.

During the past two years, she has endured many operations, but she is still living with the effects of brain trauma.

Cognitive problems, memory loss, and disorientation mean that she sadly cannot enjoy the same independence she had prior to the collision. She also requires regular care and support so that she has a good quality of life.

Her daughter states, “I don’t know why it happened, but that one day changed the rest of her life and ours.”

She is now continuing her rehabilitation at home with the help of her family. 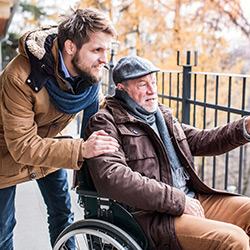 Brain Injury Group @braininjurygrp
4 days ago
We re-running our popular clin neg - brain tumours event in Manchester on 3 March. Providing an indepth look at tumours, this event received great reviews when held in London. Accredited by @apiltraining & sponsored by @NestorIFA . Details on our website https://t.co/e12lCWrthw https://t.co/exe8DkWbek
View on Twitter
4
4

Brain Injury Group @braininjurygrp
4 days ago
We've collaborated with @No5Chambers on our 2020 Court of Protection day looking at transitioning & decision making. Being held in London on 4 February and Bristol on 24 March - limited places so early booking advised. Thanks to our sponsors
@NestorIFA

Brain Injury Group @braininjurygrp
5 days ago
Having access to rehabilitation as early as possible following a brain injury can impact on recovery. If your BI was due to a third party incident, your solicitor can assist with arranging rehab. Our members are all specialists in brain injury claims.
https://t.co/jAznnFsMOK
View on Twitter
0
3