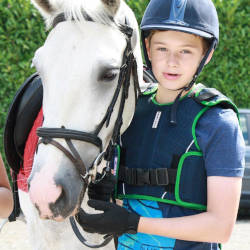 Horse riding is a popular activity in the UK, but horses can be unpredictable, they have a mind of their own, which makes riding a high-risk activity.

It’s not uncommon for a rider to suffer a fall due to their horse bucking, bolting or rearing and this is often simply a consequence of the high-risk nature of horse riding – even the most reliable horse can spook when least expected.

It happened to my own son who had ridden his horse many times before without issue when a child doing a handstand 12 foot away caused his horse to buck and unmount my son head first on to the floor. In my son’s case, a quick trip to A&E confirmed that there was no permanent damage. Fortunately, he was able to return to riding shortly afterwards.

There are occasions however when injuries can be much more serious. Injuries resulting from horse riding accidents might include fractures, spinal injuries, or head injuries. These types of injuries can be life-changing, and sadly sometimes fatal.

Whilst many horse-riding accidents are unavoidable, there are occasions when the accident can be caused by someone else’s negligence, for example:

In addition, those working around horses and spectating at events can also suffer injury and if there is a road traffic accident involving a horse, other road users such as car drivers and their passengers, could also face injury. Horses and ponies can weigh anything between 200kg to 850kg, not something you would want to collide with your vehicle.

It is essential for riders to wear a correctly fitted riding hat and consider additional protection such as a body protector and reflective clothing.

Car drivers should always pass horses being ridden on the road slowly, the British Horse Society (BHS) state a maximum of 15 mph. Car drivers are also advised to:

Unfortunately, despite many campaigns, statistics by the BHS show that in the year to 20 February 2020, 1,037 road incidents involving horses and vehicles were reported. Of those incidents, 80 horses died, 1 person was killed, and 135 people were injured. This is an increase of 23% on the same period the previous year. Most alarmingly, 81% of the incidents occurred because cars passed too close to the horses – an avoidable scenario.

This is just a snapshot of horse-riding accidents involving cars, not all incidents are reported to the BHS and the true number is likely to be higher.

Can you claim for injury following a riding accident?

Whilst many injuries are unavoidable, there are circumstances where the injury has occurred as a result of another person’s negligence meaning it may be possible to make a personal injury claim.

These generally fall into two categories:

Claims brought under the Animals Act 1971

Claims made under the Animals Act 1971 would commonly involve injury as a result of a horse kicking, biting, or bucking. The Act governs both dangerous and non-dangerous animals and different rules apply to those animals which are classed as dangerous, and those which are not. Horses are not classed as a dangerous animal, therefore the rules that apply to them mean that you would need to satisfy the following criteria in order to bring a claim:

If these criteria are met, it is not necessary to prove fault or negligence. However, there are a number of exceptions within the Act which could provide a defence and therefore pursuing a claim under the Animals Act 1971 may not always be an option.

Horse riding claims brought under the general law of negligence

If injury has occurred as a result of a horse-riding accident, such as an accident involving a motor vehicle, then a claim may be able to be brought under the general laws of negligence. For a claim to succeed, it is necessary to establish that a third party has been negligent and that the negligence caused the accident which led to injury. In some cases, even if the injury could not have been prevented, it may still be possible to bring a claim if you can prove that the injury would have been less severe if reasonable precautions were taken by the person in charge of the horse or motor vehicle.

What can be claimed?

Compensation is awarded to compensate for:

Additionally, financial loss incurred as a direct consequence of the accident, such as loss of earnings or travel expenses, can also be claimed. Bringing a claim could also provide early access to rehabilitation, which aids recovery from injuries, and provide financial security to provide for your future care needs if full recovery is not expected.

In the UK there are strict time limits for bringing personal injury claims. For most claims this is 3 years from the date of accident. Court proceedings must be issued before this date or the claim will be time-barred. There are exceptions to the 3-year time limit, most notably for children under the age of 18, where the 3-year time limit starts to run from their 18th birthday rather than date of accident. It’s important to seek legal advice as early as possible, not just because of time limits, but also so that details surrounding the accident are fresh in witnesses’ minds.

How Brain Injury Group can help?

If you have suffered a head injury as a result of a horse-riding accident, our member law firms will be able to advise whether there is potential for a claim for compensation.

My name is Paul Spence. In 2012 I suffered a frontal lobe brain haemorrhage which blew my life to pieces on every level you can imagine. The injury brought changes to my personality and amongst…
Read More

A place and time – Mary’s story

There is a place and time for everything and this is so true of neurorehabilitation. When someone first has a neurological event it is the misconception that they must have the most therapy possible in…
Read More

If you’re acting as a property and affairs Deputy then you will almost certainly need to submit an annual report of your activities to the Office of the Public Guardian. The first report is usually…
Read More

Brain Injury Group @braininjurygrp
5 hours ago
Thanks to Evorio IT Solutions and Sequoia Circle LLP (IFAs) for sponsoring a raffle prize at our charity golf day this October - your constant support of this event is really appreciated. Email enquiries @braininjurygroup.co.uk if you'd like info on sponsorship. https://t.co/4KOyqLsjwo
View on Twitter
0
1

Brain Injury Group @braininjurygrp
5 hours ago
Thanks to @premier_med_grp for sponsoring a raffle prize at our charity golf day this October and to @KrissiFletcher1 for stepping up to help at our halfway house (and eat cake all day with us!) Email enquiries @braininjurygroup.co.uk if you'd like info on sponsorship. https://t.co/ppeBF6aUq7
View on Twitter
1
2

Brain Injury Group @braininjurygrp
5 hours ago
Thanks to @tlscosts for sponsoring a raffle prize at our charity golf day this October - really grateful to Simon Wadlow and his team for their ongoing support of this event. Email enquiries @braininjurygroup.co.uk if you'd like info on sponsorship. https://t.co/Mo0P72XAFD
View on Twitter
0
0

Brain Injury Group @braininjurygrp
1 day ago
Did you know all our webinars are recorded & available for at least 9 months? Free for member firms to access, fees apply to non-members. The NHS and registered charities may also access free of charge by using a NHS or charity email address to register.
https://t.co/lZLA6WW4wU https://t.co/SzicoFdMnd
View on Twitter
1
1

Brain Injury Group @braininjurygrp
1 day ago
Webinar: The role of a case manager in the litigation process https://t.co/sMa04C9bb9
View on Twitter
2
1